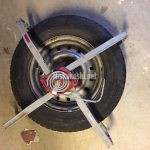 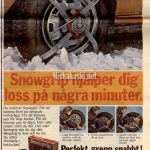 SnowGrip was an norwegian invention in the category snow chains. They were invented by Egil E Hyggen. He was awarded a price for great design in Norway in 1968 for the design of these.

According to my research the production peaked in the late 1970’s. According to the company that manufactured these – Christiana spigerwerk , they ended production in the mid 1980’s. How ever sales seem to have been running a bit longer. For insance in Sweden they were listed in the Volvo accessory cataloge even in the early 1990’s. 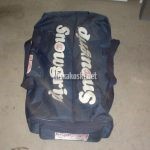 -Multiple name’s; also known as Knipetak in Norway.
-Multiple names of the manufacturer; Christiania Spigerwerk as well as UC System A/S.
-Accessory bag was available
-Made in 6 widths and a maximum size of 15 inch (theoretically)
-Due to patent problems/costs the manufacturer only to claim patent protection for the use of SnowGrip in snow on markets with cold climate such as north America and northern Europe.

N.B. back in the days a majority of the cars were rear wheel driven.